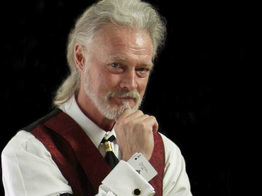 Close-up Magician Steven Carlson
Close up magic is the intimate art of producing astounding illusions by sleight of hand performed within close proximity to the audience.

A sample of Steven's props can be seen in the banner above.  Playing cards and silver dollar coins, with a few magic classics added in like the Cups and Balls and dice stacking.  However, anything that fits into Steven’s hands is fair game for miracles; a cell phone, a pen, paper napkins, a saltshaker, a coffee cup, a dollar bill… you name it!

And one client did!

He requested Steven magically produce 50 gold Krugerrand’s  he had purchased as gifts to his employees.  It's amazing how heavy 50 solid gold coins are!

When you book Steven he'll demonstrate how he did it.


Magic that mystifies the mind, enriches the soul and enchants the heart. ©

All of the images on this website are copyrighted. You may not use or reproduce them in any way without the written permission of Steven Paul Carlson.   The website itself and all its contents are also copyrighted.