What people are saying about
Steven Carlson and his unique Magic 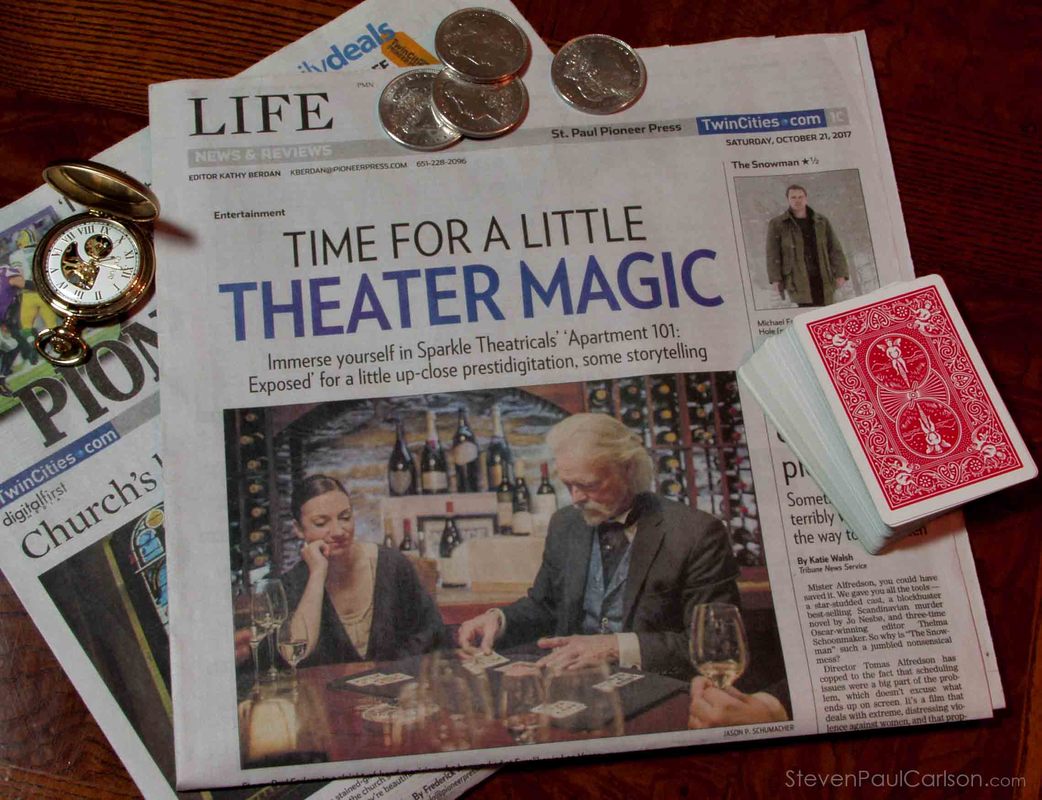 "Mr. Carlson has proven to be a major asset to our entertainment program.  Guests at our Camelot restaurant absolutely 'Adore' his fabulous personality and phenomenal 'Magic' performed table-side to 'Entrance our Guests!'  I am going to truly miss Steve and, can only say that anyone that employs him will inherit a professional this﻿﻿ is so rare in our industry!"

“Steven Carlson has that special talent of being able to convince even the most skeptical people to believe in magic.  Steven adds a touch of humor to his act that invariably leaves his audiences’ with delighted smiles.”

"Beautiful work on your websites. Outstanding talent. I think you should rightly be world-famous, of course I am just your mother."

If magic is what you’re looking for, be sure to catch Steven Paul Carlson.  His card tricks and sleight-of-hand are smooth enough to make silkworms jealous.  Picking an unsuspecting member of the audience to join him onstage, Carlson instructs the newly found assistant to cut a length of thread several times.  Carlson then gathers the loose pieces into the palm of his hand, making a tangled ball of thread.  He hands the ball to his “assistant”, who pulls it apart, revealing that the loose end is now a single strand of thread.

When not on stage, Carlson can be found tableside at one of the restaurants located on the second floor of Excalibur.  In this close-up setting, he’s at his best.
One of Carlson’s card tricks is the shuffling of four royal flushes out of a 52-card deck with one hand.  In another he has a customer pick a card at random and write it down on a well-concealed piece of paper.  At the end of the trick, Carlson correctly guesses the card every time.  Customers can get brain cramps if their skepticism gets the best of them.
Carlson has found his magical niche at the Excalibur and he plans to add a mirror above his act so the audience can have a bird’s-eye view of his card tricks.

On one of our sojourns to the Las Vegas Strip, we ducked into the Excalibur, because we had heard a rumor that there was a magical entertainer quietly performing in the Camelot Restaurant, without much publicity or to do about him.  So I slipped into the Lounge with Doty Davis, our photographer, and discovered a charming young man performing sleight of hand, utterly unbelievable smooth transitions with cards, coins, balls and brass cups.  His magic is close up, and the tricks are totally undetectable… believe me, we were eye to eye with him and couldn’t figure out how he did these amazing feats… His name is Steven Paul Carlson, and he’s wonderful.  Incidentally, I understand the food is top Gourmet quality, too, so I’d consider and evening at “Camelot” HOT!

"This was, hands down, the best decision we could have made to hire Steven Paul Carlson for our event!  I would completely recommend him to anyone looking for entertainment.  Our clients, being all adults, were skeptical of a magician at first but about 10 seconds into interacting with him, they were astonished and felt a joy overtake them!  He is amazing to talk to, watch and just spending time around him was a pleasure!  I can not wait to do business with him, in the future, and as I know he will always be a hit! "    - M. White, Vice President SFACC
© 1999-2014 Steven Paul Carlson